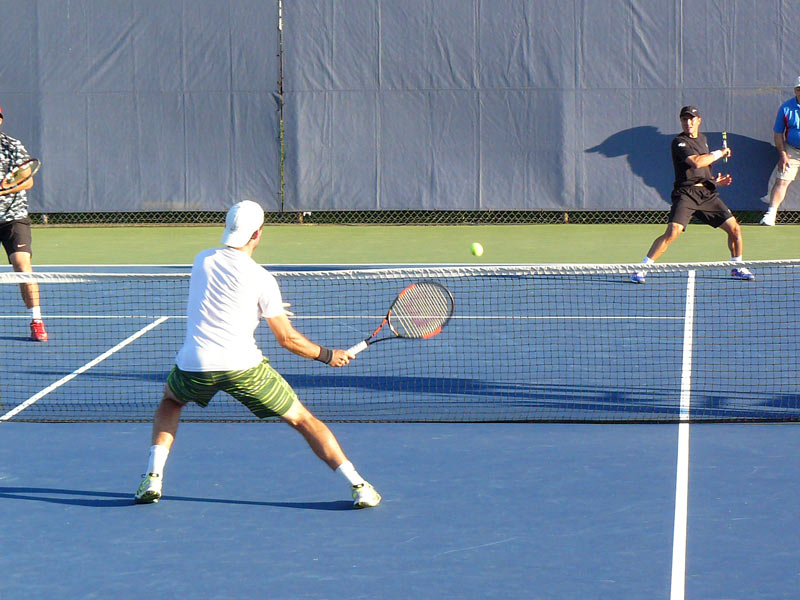 The championship picture came into focus as second-seeded Bjorn Fratangelo and qualifier Sekou Bangoura punched their tickets to the semifinals, while Kyle Edmund and Brydan Klein, both from Great Britain, also advanced in singles action.

Bangoura won a dramatic three-set match over Dennis Novikov. Novikov won the first set, 6-3, as he controlled the second serve points. In the second frame, Bangoura responded with seven aces. He broke Novikov’s serve early in the set and cruised to a 6-3 victory. In the final set, each player broke his opponent’s serve once, as the score reached a 6-all tie. The players went back and forth in the tiebreaker, as each player had opportunities to close out the contest. Finally, Bangoura grabbed a 10-9 lead. On match point, he forced a Novikov error, ending the contest.

Bangoura became the first qualifier to advance to the LG&T Challenger semifinals since 2012, when Fritz Wolmarans made a run to the finals. Bangoura is also just the seventh qualifier to make it to the semis since 1998.

Fratangelo held off a charge by Nicolas Meister, as Fratangelo posted a 6-1, 4-6, 7-5 victory to qualify for the semifinals. The two seed played a strong first set to take the lead , but Meister came back with a win to force a third frame. The pair battled, with each player holding serve until Fratangelo broke Meister deep into the twelfth game to close out the decision. Fratangelo won 5-11 break points in the contest.

Klein, the sixth seed, fought back from a deficit and an injury to move into the semifinals Friday. Frederik Nielsen took the first set 6-2, as Klein worked through an apparent elbow injury. In the second frame, Klein went down 2-0 before winning five straight games on his way to a 6-3 win, forcing a decisive set. Midway through the frame, Klein broke Nielsen’s serve and held on for a 6-4 victory, clinching his spot in the semis.

Edmund handled Mitchell Krueger in their quarterfinal bout, as the #1 seed won by scores of 6-3, 6-2. Edmund won four break points to control the match

Earlier Friday, Edmund and Noah Rubin split a pair of sets before darkness halted their match Thursday night. They resumed competition Friday with the score even at 1 in the third frame. Edmund controlled Friday’s action, serving six aces and winning 13-14 first-serve points on his way to a 6-4 win

In doubles play, Novikov and Daniel Nguyen defeated Bangoura and Guilherme Clezar in a semifinal contest, 6-4, 6-4. Novikov and Nguyen took 20-24 first serve points to control the match. The duo will play the winner of tomorrow’s Dean O’Brien/Ruan Roelofse vs. Liam Broady/Luke Bambridge bout.