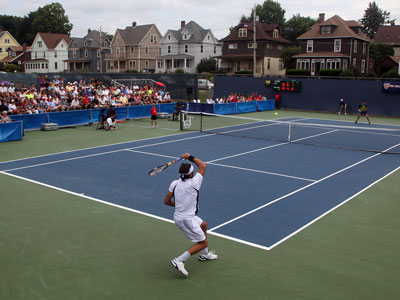 Come enjoy a summer weekend in the park watching 32 players outmaneuver each other to take the final four slots for the main draw.

Local players Alexander and Ian Van Cott as well as Alex Tsai will be competing in the qualifying draw. The Van Cott brothers recently finished their first season at Tulane University while Tsai redshirted his sophomore year at Wake Forest.

Main draw players in the 20th Annual LG&T Challenger are competing to accumulate the most ATP World Tour points by the end of a four tournament series. The player with the most points after four consecutive men’s hard-court tournaments (Lexington Challenger, Odlum Brown Van Open and Comerica Bank Challenger) will win a wild card into the 2013 U.S. Open.

The West Side’s Recreation Park plays home to 32 professional tennis players (&amp 16 doubles teams), ranked among the 100-200 best in the world, as they spend 9 days competing for $50,000 in prize money.

Our challenger is a unique view of a world sport. 2011 included players from 20 different countries; but also highlighted the best junior and college players in American tennis.

Former champions include Kei Nishikori, 2010 champion and now ranked #26 in the world, and Andy Murray, winner of the Gold at the 2012 London Olympics. Ryan Harrison, a participant last year is now on the David Cup team. James Blake and Lleyton Hewitt are also well known former participants.

Strategically positioned prior to the US Open, our event provides a perfect venue for world class competition, up close and personal in a cozy neighborhood.