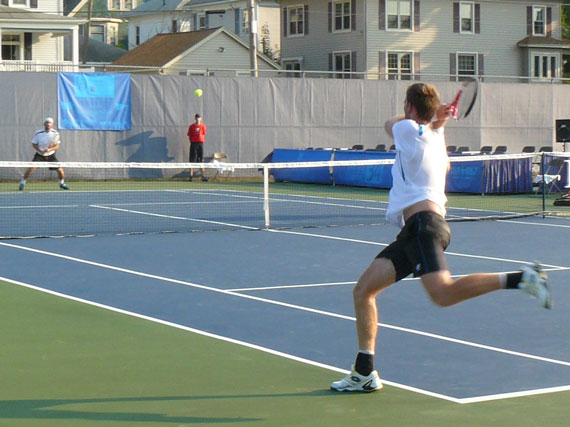 The 4 top-seeded singles players at the LG&T fell in the first round today, as the number 5 seed Robby Ginepri advanced easily into the 2nd round.

In a continuation of yesterday’s match that was postponed by darkness, unseeded Michael McClune (USA) defeated Marco Chiudinelli (SUI) the number 2 seed, 7-5, 3-6, 7-6(5). Chiudinelli, serving up a break at 5-4 in the third set, was not able to convert any of 4 match points, allowing the match to get back on serve leading to the tiebreak. Chiudinelli began the tiebreak with a mini-break, and after taking a 3-1 lead, McClune battled to win 6 of the next 8 points to win the tiebreaker 7-5. McClune, 22, is improving his ranking after recovering from a hip injury in 2010. In 2007, he won the USTA 18’s singles title to win a wild card berth into the US Open main draw. Chiudinelli, 30, from Switzerland, is currently ranked 129 in the world, having reached his best ranking of 51 in February, 2010.

Number 1 seed Dudi Sela (ISR) lost a thrilling 3 set match to Rhyne Williams (USA) in a match that lasted just over 2 ½ hours in the afternoon heat 6-2, 5-7, 7-6(8). Williams, 20, is a former top junior and University of Tennessee standout, turned pro last summer after winning a Pro Circuit Futures event in Florida. He was a 2 time All American at Tennessee and advanced to the NCAA singles final in 2011.

Sela, 27, resides in Tel Aviv, Israel and has a career best ATP ranking of 29 which he achieved in July 2009. Sela played in the main draw at all 3 majors so far this year, the Australian Open, French Open and Wimbledon. In February of this year he reached the semi-final at the Delray Beach, FL ATP event. He has been a member of the Israeli Davis Cup team since 2005 with an overall record of 16-12. In 2011 Sela claimed 3 Challenger level titles.

Qualifier Mitchell Frank (USA) defeated wild card Bjorn Fratangelo (USA) 6-3, 7-6(4) to advance into the second round. Frank captured both the Intercollegiate Athletic Association All-American and the USTA/ITA National Indoor Collegiate Tennis Championship as a University of Virginia freshman in October 2011. Fratangelo, 18, (named after Bjorn Borg) was the first American to win the Boy’s Singles Title at the 2011 French Open since John McEnroe in 1977.

Number 8 seed Adrian Mannarino (FRA) defeated American Jeff Dadamo 7-6(4), 3-6,
6-2 to advance into the second round. Mannarino is ranked 197 in the world, after reaching a career best ranking of 49 in July 2011. Dadamo recently capped his collegiate career by winning the 2011 NCAA doubles title at Texas A&M with partner Austin Krajicek (Krajicek lost in the first round here yesterday to Michael Yani).

Greg Ouellette (USA) knocked off the number 4 seed from Lithuania Laurynas Grigelis 5-7, 6-0, 6-4. Ouellette, 26, from Ormond Beach FL was a 5 time All-American at the University of Florida and was #2 in the ITA Division 1 collegiate rankings during his senior year in 2008.

Another top seed fell when #3 Izak Van der Merwe (RSA) was defeated by Alex Bogdanovic (GBR) 7-6(3) 6-1. Van der Merwe was the top seed here last year and advanced to the semi-final, losing to Wayne Odesnik. Bogdanovic, 28, is currently 379 in the world, having reached a career best ranking of 108 in 2006. This past Sunday he won the outdoor clay court Futures event in Rochester, NY.

Adrian Bossel (SUI) defeated Chris Guccione (AUS) in straight sets 7-6(5), 7-5. Guccione was a semi-finalist here last year in doubles, playing with fellow Australian Carsten Ball. Bossel, currently ranked 393 in the world, won 2 Futures events and was a finalist in a third in 2011.

After a slow start, American qualifier Andrew Carter regrouped to defeat Ante Pavic (CRO) 2-6, 6-2, 6-3. Carter, of the University of Louisville, was the number 1 ranked player in North Carolina under 18’s in 2007. 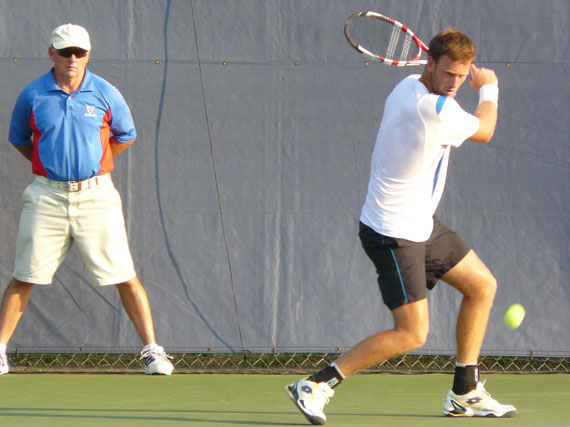 Michael Venus, the 24 year old qualifier from New Zealand, could not keep up with the veteran American Bobby Ginepri, losing in straight sets 6-2, 6-2. Venus, 24, played tennis at LSU, where in 2009 he was named SEC Player of the Year, and that same year was named an ITA (Intercollegiate Tennis Association) All American. Ginepri is currently ranked 184th in the world after hitting career high ranking of 15 in 2005. He reached the semi-finals at the U.S. Open in 2005, losing to Andre Agassi in 5 sets, and has reached the 4th round at the French Open, Wimbledon and the Australian Open. He was sidelined in 2010 with a broken elbow and returned to action in the middle of 2011. This year, Ginepri reached the final of the USTA Challenger event in Honolulu. He has 3 career ATP singles titles. 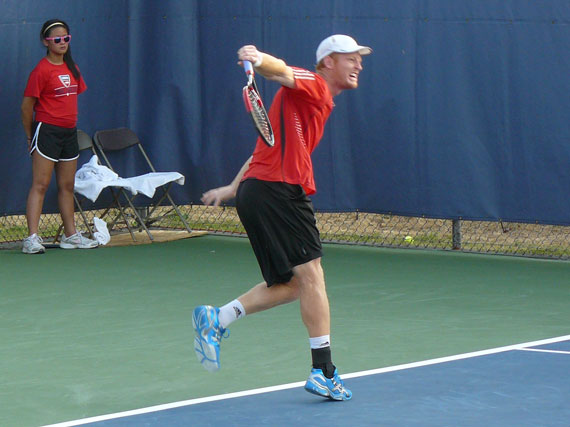 In another match that lasted 3 hours and 10 minutes, Daniel King-Turner (NZL) defeated Miguel Gallardo-Valles (MEX) 6-7(4), 6-4, 7-6(1). King-Turner has played mainly on the Futures circuit, but did reach the quarter-finals of the Kaohsiung, Japan Challenger event this year.