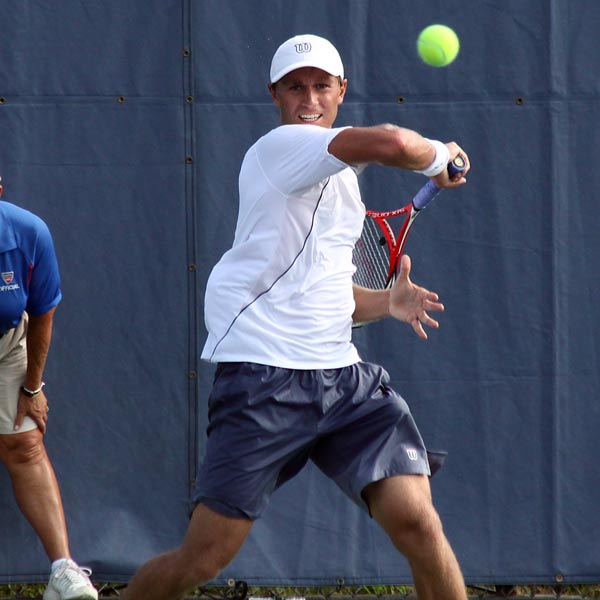 The semifinals of the Levene Gouldin & Thompson singles tournament is finalized and it features a pair of All-American matchups that will take place Saturday afternoon at Recreation Park. Three seeded players won on Friday, with Austin Krajicek (USA) pulling off the three set upset over second seed Mischa Zverev (GER).

In the first matchup of the day, Krajicek and Zverev held center court in Binghamton. The first set saw each player hold serve through the first five games. However, Krajicek, a Tampa, Fla. resident, broke through in the sixth with a pair of powerful forehand winners to break the German Zverev and take a 4-2 lead. Krajicek, ranked 270 in the world, held serve in the seventh and used a 108 mph ace in the final game to win the first set, 6-3. Krajicek fired nine aces during the match, compared to just one double-fault.

The 25-year old Zverev would not go away quietly however, winning the first five games of the second set. Krajicek responded with three straight games of his own, but it wasn’t enough as Zverev (No. 149) went on to even the match at one set apiece, 6-3. In the final frame, Krajicek earned the advantage early, breaking Zverev in the second game. The Texas A&M All-American took a 4-1 advantage before Zverev rattled off three straight games to even the set at four. Krajicek did not blink however, taking the next two games and the match, 6-4. Zverev is the second seeded player Krajicek has defeated in the tournament (No. 7, M. Jaziri).

Top seed Rhyne Williams (USA) fended off Takanyi Garanganga (ZIM) with a 6-3, 4-3 (inj) victory in the day’s featured match. After each player held serve for the first six games, Williams started to distance himself from Garanganga. The Knoxville, Tennessee native quickly went ahead 15-40 in the seventh game, holding on for the 4-3 advantage. After winning his service point, Williams fended off a couple strong serves from the 22-year old Garnagnaga and was able to win the first set, 6-3.

In between sets, Garanganga sought treatment for an ailing leg injury but continued on. In the first game, Williams reeled off five aces to grab a quick 1-0 lead. Later with the score tied at two, the pair had their longest game of the match. The game was tied at deuce on six separate occasions, but Williams prevailed by slamming an ace for the game winning point. For Garanganga, that may have been the straw that broke the camel’s back as he was forced to retire the match due to injury trailing in the second set 4-3.

Williams’ semifinals opponent will be sixth-seed Alex Kuznetsov who eliminated Tennys Sandgren (USA) in straight sets, 6-4, 7-5. Kuznetsov, the 163rd ranked player in the world, had the slight edge on the return, winning 31-of-78 (39%) on the afternoon, compared to just 26 percent from Sandgren.

Bradley Klahn, the fifth seed, advanced to the semifinals by way of a 3-6, 6-1, 6-2 victory over Sanam Singh of India. Klahn was the second American to reach the final four and will face Krajicek for a berth in the LG&T Challenger finals. After dropping the first set, 6-3, Klahn, a former NCAA singles champion at Stanford, found his groove and won nine of the next ten games. In the second set Klahn broke Singh’s serve three times to take the frame 6-1.

In the third set, Singh, 25, was unable to handle the 161st ranked player’s serve dooming him in the final frame. Klahn won the first three games of the third set and eased to a 6-2 victory over the No. 336-ranked Singh. Klahn reached the finals by virtue of winning six of 11 break points and at one moment breaking Singh five consecutive times.

Fresh off his quarterfinal singles victory, Bradley Klahn teamed up with Michael Venus (NZL) to defeat the American duo of Jarmere Jenkins and Austin Krajicek, 7-5, 6-3. It will be a battle of top seeds in the final on Sunday as they will face Australians John-Patrick Smith and Adam Feeney in the final. Smith and Feeney earned a trip to the final after Nicolas Meister was forced to withdraw due to injury.

Two matches are scheduled for tomorrow, beginning with Bradley Klahn versus Austin Krajicek at 11 am. Top seed Rhyne Williams will go toe-to-toe with Alex Kuznetsov in the final match of the day at Binghamton Recreation Park.