Klahn in both singles and doubles finals tomorrow 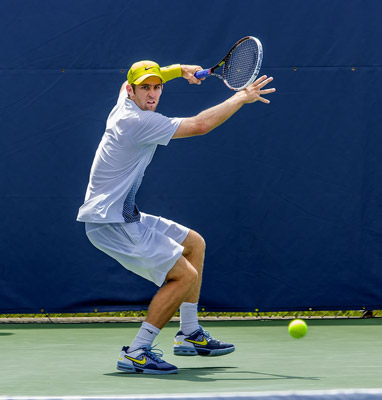 Tomorrow’s singles final is ready to go as both Bradley Klahn and Alex Kuznetsov were victorious on Saturday afternoon from Recreation Park. Top seed Rhyne Williams was ousted by Kuznetsov who took him in straight sets, 6-1, 6-4.

In the opening semifinals bout, a pair of American lefties went head-to-head as fifth seed Bradley Klahn battled Austin Krajicek on Saturday afternoon. Both players were on point serving in the opening set, winning all three of their first service games to begin the afternoon. With the score at 3-3, Klahn held serve and later managed to break Krajicek with an excellent backhand winner that skipped cross court. He proceeded to rifle a 111 mph ace to begin the next game and later took the set, 6-3, when Krajicek’s return volley went just long.

Krajicek, 23, immediately went ahead three games to none in the second set as he began to claw back. With the score at 4-2, Krajicek held serve, claiming the point on an unforced error. The 270th ranked player in the world wrapped things up in the second set, 6-3, as the two marched on to a third and final set.

The third set was all-Klahn as he did not trail a single game in the frame. Fatigue set in for Krajicek who was unable to withstand the shot making ability of the fifth seed Klahn. In the end, the former Stanford grad would advance with a 6-0 third set victory and a trip to the finals tomorrow afternoon.

“After falling in the second set it was important that I clear my head and start to re-focus,” Klahn said afterwards. “I had a strong service point to begin the third and could sense he was starting to get a little fatigued so I just kept the pressure on.”

Not only will Klahn be eyeing a singles crown here, but he also will be competing in the finals of the doubles tournament with partner Michael Venus (NZL). The two will square off with the top seeded team of Adam Feeney and John Patrick Smith (AUS). For Klahn, he is looking forward to the challenge that awaits.

“It’s a great accomplishment to qualify for the finals in both singles and doubles,” Klahn explained. “That’s why you enter in these events, to compete for championships. I’m going to give it my all and leave everything out there on the court tomorrow.” 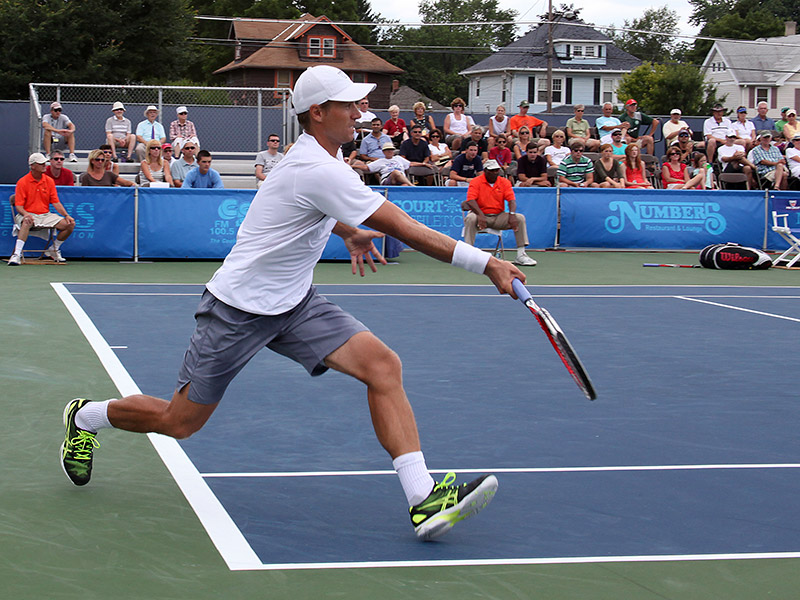 In the other semifinals matchup, first seed Rhyne Williams (USA) was quickly tested by sixth seed Alex Kuznetsov (USA). The 157th ranked Kuznetsov jumped ahead early with a 3-0 lead in the first set, winning a pair of break points in the process. After Williams held serve in a lengthy game, Kuznetsov took back control. He started off with an ace, and then won a far court winner that helped propel him to a 4-1 advantage. 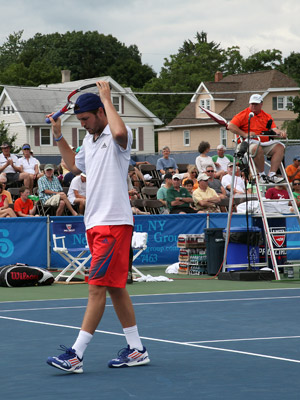 Williams appeared to be extremely frustrated in the next game, losing a battle that featured multiple deuce points. The top seed gave away a service point by way of double fault, enabling Kuznetsov to later finish out the set with a 6-1 win.

In that second set, Williams got back on track with his serve. A 115-mph serve from the 129th ranked player in the world solidified a 1-0 lead. Later, with the score at 2-2, Kuznetsov was able to break Williams’ serve and next won his service point with a strong forehand winner to take a 4-2 edge. Down the stretch, Kuznetsov was able to hang on as he picked up the match point with a return from Williams that hit the net, advancing to the finals by the score of 6-1, 6-4.

“I knew heading into this match that I had my hands full with a tough competitor in Rhyne (Williams),” Kuznetsov explained. “Because he’s strong on the serve and his forehands, I knew I had to take chances when I had the opportunity. Luckily, I was able to do that.”

For Kuznetsov, this is the second finals of a USTA Pro Circuit event he has reached in 2013. Back in April, he won a straight set victory over Wayne Odesnik (USA) to claim the title in Sarasota, Fla.. The Bradley Klahn/Alex Kuznetsov singles final will start directly at 11 a.m. tomorrow, and will be followed by the doubles championship between Bradley Klahn/Michael Venus and Adam Feeney/John-Patrick Smith.