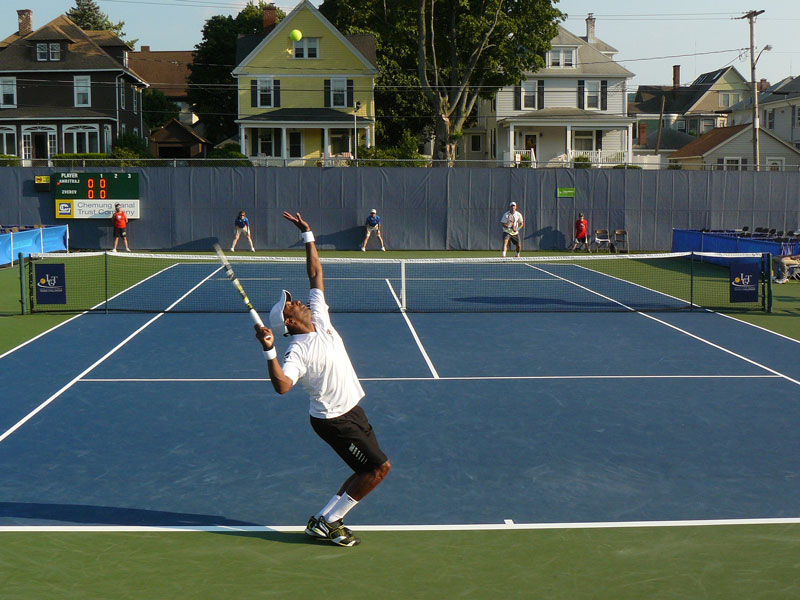 On the third day of the Levene Gouldin & Thompson Tennis Challenger, four qualifiers advanced to the main singles draw with victories on the court. Oddly enough, the upset of the day came in the first match when top seeded qualifier Bjorn Fratangelo (USA) was knocked off by Denmark’s Frederik Nielsen in straight sets, 6-1, 6-3.

Nielsen, 22, pulled off the upset in large part to his ability to hold serve. The 619th ranked player in the world won 38-of-57 (66 %) service points on Monday and earned his way into the main draw by defeating the 19-year old Fratangelo, who came into the LG&T Tennis Challenger ranked at 335. Nielsen will play eighth seeded Farrukh Dustov of Uzbekistan in the first round of singles play.

In a matchup of statesmen, Mitchell Krueger, 19, bested the third seed Jason Jung in a marathon match that lasted nearly two-and-a-half hours. After dropping the first set 6-1, Krueger fought back with a 7-6(3) victory in the second set and closed out the match with a 7-5 third set win that led him to advancing. Krueger’s endurance has been tested early on, going three sets in two of his three matches, including a nearly three hour battle in his opening round match of the qualifiers.

Also advancing to the main draw of singles on Monday were Greg Ouellete (USA) and Takanyi Garanganga (ZIM). Ouellette, 27, defeated fellow American Jeff Dadamo 6-4, 7-6(5). The former five-time All-American at the University of Florida will match up against third seed Yuichi Sugita of Japan. Garanganga, 22, advanced in straight sets, defeating Martins Podzus of Latvia 6-0, 7-6(2). Garanganga was the second seeded qualifier and currently holds an ATP world ranking of 390.

In the main draw, second overall seed Mischa Zverev (GER) won the opening set over Prakash Amritraj 6-2, and due to an injury by Amritraj, was able to advance after jumping ahead 3-2 in the second set. The match lasted under an hour and featured eight aces from the 6-foot-3 lefty who is currently ranked 149 by the ATP. Ilija Bozoljac of Serbia bested American and Ohio State graduate Chase Buchanan in three sets, 6-2, 5-7, 6-1. Bozoljac, 27, showed his prowess on serve by claiming 16 aces on Monday afternoon.

On the doubles court, Rifat Biktyakov and Farrukh Dustov of Uzbekistan secured a 6-1, 6-2 triumph in the final round of the doubles qualifying round early Monday afternoon over the American duo of Krasimir Kolev and Craig Schwartz. Dustov and Kiktyakov will move on to face Jason Jung and Evan King.

Americans Jeff Dadamo and Nicolas Meister advanced in the doubles main draw with a three-set victory over Peter Kobelt and Michael Redlicki (USA). After splitting the first two sets, the pair controlled play in the third and decisive set, winning 10-4. In the final doubles match of the day, Mohamed Haythem Abid and Malek Jaziri of Tunisia were victorious, pulling out a 6-4, 6-4 win.

On Tuesday, 13 matches are scheduled at Recreation Park, including 12 first round singles matches and one doubles match. Seven of the top eight seeds will be in action, highlighted by top seeded Rhyne Williams who will take on fellow American Nicolas Meister on the center court at 5:30 pm.