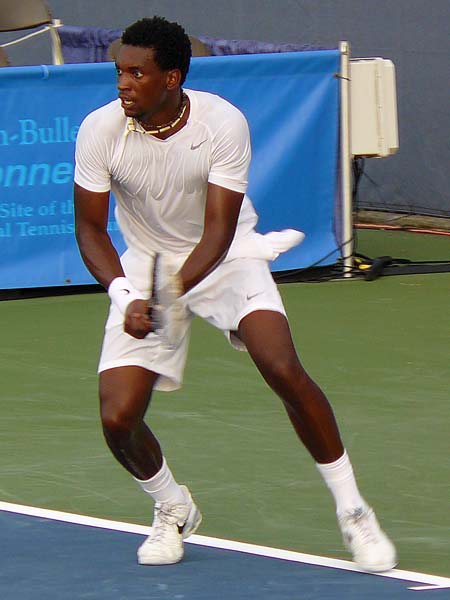 The quarterfinals of the singles tournament takes shape, as four of the top eight seeds stay alive and are still in the running for the 20th individual crown at the tournament. In addition to the singles draw, the semifinals for the doubles championship was decided today as a pair of American teams have moved along.

The featured match of the day came between two qualifiers; Denmark’s Frederik Nielsen and Takanyi Garanganga (ZIM). The 22-year old Garanganga took a quick 3-0 lead in the first set thanks to a powerful serve that could not be returned. Nielsen later won two of the next three points before play was suspended due to rain. After an hour delay, Garanganga came out strong. He held serve and also was able to break the 12-year veteran Nielsen, taking the first set 6-2.

In the second set, Garanganga looked in complete control as he went up five games to none. However, Nielsen wouldn’t give in as he fought his way back to almost level footing at 5-4. A bit of luck played into Garanganga advancing as his return hit the net and trickled in front for the match winner.

Standing in the way of Garanganga will be top seed Rhyne Williams who won his second three set match of the event. Williams was involved in a tightly contested match, particularly in the first set with New Zealand’s Michael Venus. The two were forced to a tie break in that first set, where Williams prevailed with a 7-4 win. After Venus took the second set, 6-2, Williams went to work. The former Tennessee Volunteer rattled off multiple aces and broke Venus’ powerful serve on two occasions to hold on for the 7-6(4), 2-6, 6-2 win.

In the opening match of the day, Bradley Klahn (USA) advanced to the quarters with a three-set triumph (6-3, 4-6, 6-2) over Mitchell Krueger (USA). Klahn, 22, distanced himself in the first set when the score was tied at two, winning three consecutive games to take a 5-2 lead. Now with the score at 5-3, the six-time NCAA All-American at Stanford finished off the first set with an ace; one of his 16 on the afternoon.

In the second set, the 19-year old Krueger fought his way back trailing four games to two. The Texas native battled back from a 40-15 deficit to take the seventh game and later knotted things up at four games apiece by breaking Klahn’s serve. After winning his service point, he grabbed the game and the second set in comeback fashion to force a third set.

The lead changed hands multiple times early in the third set as Klahn found himself holding a slight 3-2 advantage. The 2010 NCAA singles champion made use of timely serves and a few unforced errors to reel off four straight games and the 6-2 win over Krueger. Klahn reaches his fourth quarterfinal of the 2013 season with the victory.

India’s Sanam Singh cruised in straight sets in the morning session over third seed Yuichi Sugita (JPN), 6-4, 6-2. Singh, 25, won 71 percent of his service points in the match as he completed his second straight set victory of the week. Singh will now go head-to-head with Klahn, setting up a rematch from earlier this year in which Singh was victorious at a USTA Futures title match.

In doubles play, the American duo of Jeff Dadamo and Nicolas Meister moved on with a 6-1, 6-2 victory over third seed Ilija Bozoljac (SRB) and Mischa Zverev (GER). They won 21-of-22 first service points on Thursday afternoon, grabbing a semifinal matchup against the Australian team of John-Patrick Smith and Adam Feeney. The top seeded Aussie duo bested Mohamed Haythem Abid (TUN) and Malek Jaziri (TUN). Each team split a set, but Smith and Feeney advanced with a crucial 10-4 third set win.

As for the final two quarterfinal doubles matches, Austin Krajicek and Jaremere Jenkins (USA) outlasted India’s Yuki Bhambri and Sanam Singh by a score of 6-3, 2-6, 10-7, and Bradley Klahn (USA), who’s partnered with Michael Venus (NZL) also came out on top on Thursday evening as they won 6-3, 7-5 over Jason Jung and Evan King (USA).

Quarterfinals singles action begins on Friday morning at 11 am on center court as Austin Krajicek goes to battle against second seed Mischa Zverev (GER). Three more quarterfinal matches are slated for tomorrow and also semifinal #1 of the doubles tournament will be on tap at Recreation Park.