Local Van Cott Brothers Fall in First Round of Doubles 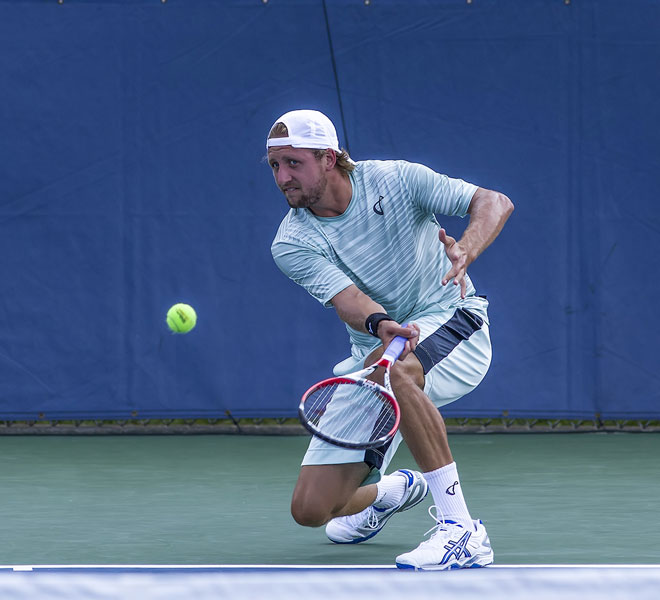 In the first match of the day, American Austin Krajicek knocked off No. 7 Malek Jaziri of Tunisia in a three-set battle, 6-4, 2-6, 7-5. Krajicek, 23, kept the 178th-ranked Jaziri off-balance with his left-handed serve throughout the 2 hour and 11 minute match. In the first set, both players held serve until Krajicek (No. 277) broke Jaziri’s serve in the 10th game to earn the 6-4 victory. Jaziri countered however in the second set, cruising to a 6-2 triumph over the three-time All-American at Texas A&M to even the match at one set apiece.

In the deciding frame, both players again held serve throughout most of the set. Jaziri held break-point late in the 11th game, but Krajicek serve saved him as the 29-year old Tunisian was unable to handle the lefty service. Krajicek was once again able to break Jaziri thanks to a double fault on match point for a 7-5 win, advancing to his first quarterfinal appearance in an ATP Challenger Tour event in 2013.

Alex and Ian Van Cott (USA), who are from nearby Unadilla, faced off against No. 4 Krajicek and Jarmere Jenkins in their first round doubles match. Jenkins and Krajicek ended the Van Cott run with a straight set (6-1, 6-4) victory. The Van Cotts had an opportunity to make some noise early on with a break-point opportunity in the opening set, but dropped the final two points to go down 1-0 early. The Van Cotts, who were awarded a wild card into the doubles main draw over the weekend, battled back to even the first set after holding serve. However, their momentum was short-lived as the American pair of Jenkins and Krajicek won the next five games to take the first set 6-1.

In the second set, the Van Cott twins began working into a rhythm opening the frame by holding serve, then breaking Jenkins and Krajicek to take a 2-0 lead. Krajicek, who moved onto the quarterfinals in the singles draw earlier in the day, used his potent serve to rally his tandem. Jenkins, the reigning ITA National Player of the Year and Krajicek went on to win the next four games and take a 4-2 advantage. The Van Cotts, who recently finished their freshman year at Tulane, held their next two serves to trim the deficit to one, 5-4. However, it wasn’t enough as Krajicek served for the game and ended the Van Cotts hopes of moving on in the tournament. Krajicek and Jenkins move on to face Yuki Bhambri and Sanam Singh in the doubles quarterfinals.

In the longest and most competitive match of the day, American Tennys Sandgren rallied to defeat Ilija Bozoljac (SRB) in three sets 3-6, 7-6(0), 6-3. Bozoljac won the first set, 6-3, after a break in the seventh game in a match that took 2 hours and 15 minutes. The Serbian went on to win the next two games to take a 1-0 advantage over the Tennessee All-American.

The second set witnessed some of the most hotly contested tennis of the tournament as each player held serve until the 10th game. Sandgren earned the first break to take a 6-5 lead after returning a 120 mph serve from Bozoljac. The 318th-ranked player in the world, Bozoljac, countered with a break of his own to push the set to a tiebreaker. Despite, seven aces in the frame reaching speeds of up to 127 mph by Bozoljac, Sandgren cruised in the tiebreaker 7-0. In the final set, the pair traded breaks in the first two games, but a powerful ace (120 mph) by Sandgren gave him a 3-2 lead. From there it was all Sandgren (No. 302) as Bozoljac ran out of gas and dropped the final set 6-3. Sandgren advances to the quarterfinals where he will face No. 6 Alex Kuznetsov.

Second-seeded Mischa Zverev (GER) advanced to the quarterfinals with a straight-set 6-4, 7-6(0) victory over University of Tennesse graduate John-Patrick Smith. Zverev, 25, quickly fell behind the Australian 3-1, but was able to battle back and win five of the next six games for a 6-4 first-set victory. In the second set, Smith played the 149th-ranked player in the world to a tiebreaker, but was easily disposed of 7-0 to fall in straight sets. Zverev will face Krajicek in the quarterfinals on Friday.

The most unfortunate match of the day took place between No. 6 Alex Kuznetsov (USA) and Stephane Bohli (SUI). The 29-year old from Switzerland dominated from the start, breaking Kuznetsov to open the match. Bohli was able to overpower the 24-year old American and take the first set 6-2. However, early in the second set Bohli was forced to retire following an injury, allowing Kutznetsov (No. 163) to move on to the quarterfinals after just 47 minutes of play.

Americans Jason Jung and Evan King took on qualifying draw winners Rifat Biktyakov and Farrukh Dustov in the first doubles match of the day. Jung and King, who hold a combined doubles ranking of 1011, were down 6-5 late in the first set before forcing a tiebreaker. During the tiebreaker, Jung and King were able to build an early lead and hold off the duo from Uzbekistan. In the second set, the American pair cruised to a 6-0 victory after earning breaks in games two, four and six. They move on to play Bradley Klahn and Michael Venus in the quarterfinals.

In the final doubles match of the day, which concluded the opening round of the doubles draw, Australians John-Patrick Smith and Adam Feeney eased to a 6-1, 6-2 victory over Greg Jones (AUS) and Greg Ouellette (USA). Feeney and Smith, who were awarded the top seed based on their No. 324 doubles ranking, advance against Mohamed-Haythem Abid and Malek Jaziri of Tunisia in the quarterfinals.