Six of top-8 seeds advance to Round of 16 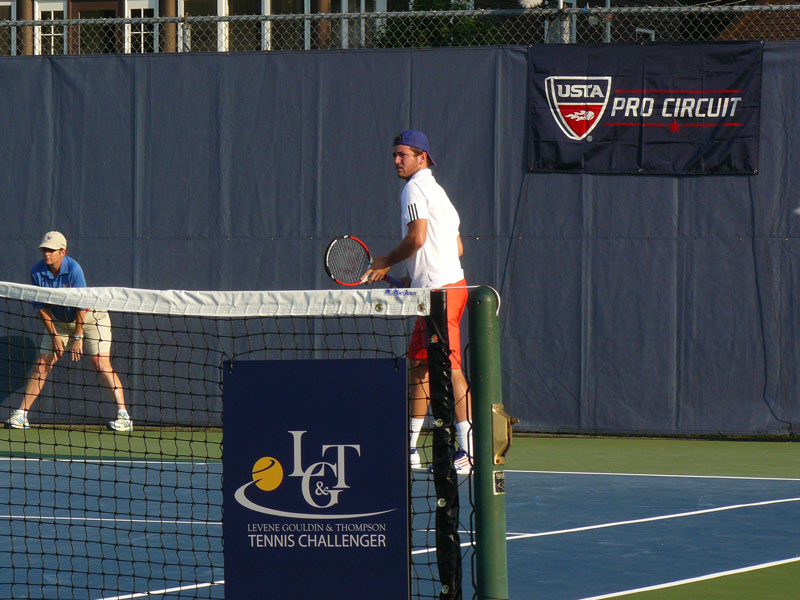 The round of 16 for the singles main draw has officially been decided as 12 first round singles matches were completed Tuesday. Six of the top eight seeds advanced to the second round; including top-seed Rhyne Williams (USA) who battled his way to a hard fought straight set win.

Williams, 22, was put to work early on in his opening round match versus Nicolas Meister (USA) in the featured match Tuesday evening. The 129th-ranked Williams and Meister traded points through the first 10 games (5-5) in the opening set before Williams finally broke through. A measured drop shot gave him the 6-5 advantage and the momentum he needed to secure the first set; 7-5. He allowed just four points all first set while serving. 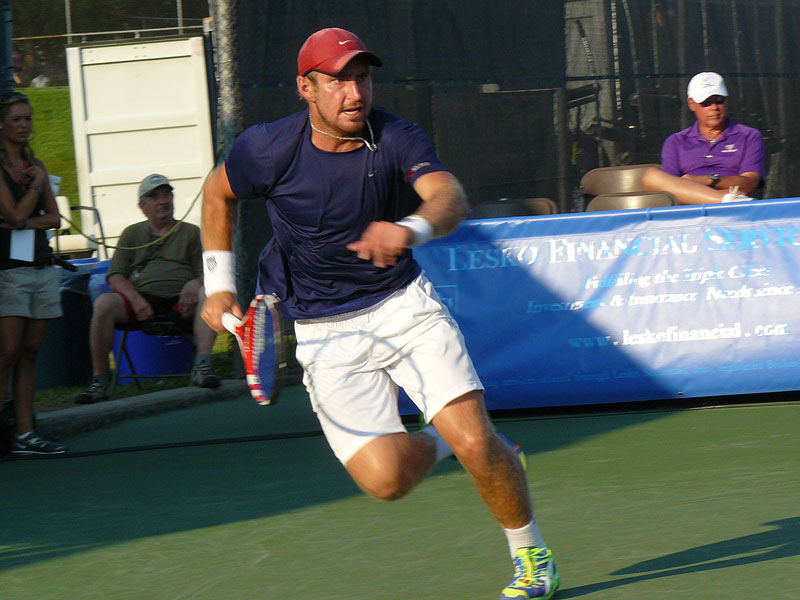 In the second set, the 24-year old Meister would not go away quietly. Despite falling behind 4-2, he reeled off three straight games to take the slight 5-4 advantage. Down 6-5, a crucial hold from Williams enabled a tiebreaker to see if there would be a third set. In the tie break, Williams held control, winning seven straight points to advance on in the tournament.

Fourth seed Donald Young (USA), who was chosen as a wild card into the event, was eliminated by Tennys Sandgren (USA) who completed a terrific comeback from down a set. Trailing 5-3 in the second, Sandgren won four consecutive games to push the match to a third set and from there the tides shifted as he bested the 154th ranked Young with a 6-2 victory. Sandgren, 21, has had previous success on the USTA Pro Circuit, winning five individual singles championships since 2011 when he first turned pro.

The other seeded player to fall this afternoon was Farrukh Dustov of Uzbekistan. Dustov, 27, won the opening set 6-3, but was upended in the second set by qualifier Frederik Nielsen of Denmark. Nielsen, 29, went on to take the first three points of the third set before Dustov was unable to finish due to an injury.

In fact, it was an excellent day for the qualifiers as three out of the four advanced into the second round of main draw action. Mitchell Krueger (USA) defeated Aussie Adam Feeney in straight sets; 6-4, 6-4, and Takanyi Garanganga of Zimbabwe also moved along with a 7-6(5), 6-2 decision over Dennis Novikov (USA).

In the morning session, fans were treated to some highly competitive tennis as both spectators and competitors battled the heat. At center court, 19-year old Christian Harrison (USA) came out strong out of the gate, winning the first set 6-4 over fellow countrymen Alex Kuznetsov. However, the veteran Kuznetsov, 26, battled back in the second set as he jumped ahead 4-2 after breaking serve from Harrison. After falling behind 30-0 in the next game, he reeled off four straight points to secure the 5-2 lead and just moments later took the set at 6-2.

In the third and decisive set, both players played even through the first six games (3-3), but Harrison’s serve deserted him down the stretch as Kuznetsov took full advantage. The nine-year pro took the next three games on his way to a 4-6, 6-2, 6-3 first round win. Harrison had 13 double faults as compared to just two from Kuznetsov.

Another competitive match that took place at the same time was the third seed Yuichi Sugita (JPN) against American Greg Ouellette. In the first set, Ouellette took a 5-4 advantage, but the 152nd ranked Sugita would not budge. He held serve to tie things up at five and managed to win the last two games to grab the first set, which lasted nearly 80 minutes. In the second set, both players went back-and-forth at one another as they were forced to a tiebreak. Sugita rose to the occasion late with a 7-6(3) victory that propels him to the second round of singles action.

Fifth seed Bradley Klahn used a mix of strong serving and accurate forehands to defeat Yuki Bhambri of India in straight sets; 6-3, 6-3. Klahn, 22, staged off many long rallies from Bhambri, earning a trip into the top-16 of an ATP World Tour event for the seventh time in 2013. Fellow lefty Austin Krajicek (USA) edged out the reigning ITA National Player of the Year Jarmere Jenkins (USA) in straight sets; 6-2, 6-4. Krajicek owned serve, winning nearly 71 percent of his service points. He will face Malek Jaziri (TUN) who also was victorious on Tuesday afternoon, pulling out a 7-5, 6-1 first-round triumph.

One doubles match was played on Tuesday, featuring the team of Iljac Bozoljac (SRB) and Mischa Zverev (GER), who advanced in straight sets over Garanganga and Sugita. The duo will play Americans Jeff Dadamo and Nicolas Meister in second round doubles play.

On Wednesday, the first round of doubles matches will conclude and second round singles play will begin. Action will take place on center court beginning at 10 am and court one play will start at roughly 1 pm. Before the headline match at 5:30, there will be a fast serve contest which is sponsored by ‘O’Connor Investment on center court.