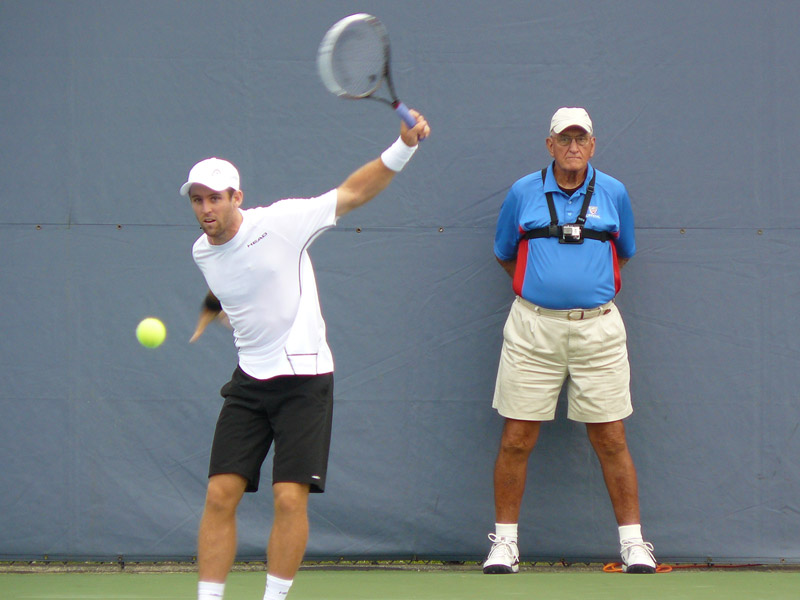 Top seed Klahn’s first round match suspended due to darkness

In the lone upset of the day, Jared Donaldson knocked-off No. 4 Marius Copil in the first round. Top seed Bradley Klahn’s first round match, which didn’t start until 7 p.m., was suspended due to darkness.

Donaldson, a 17-year old from Chepacet, R.I., defeated Copil in straight sets, 7-5, 6-1. Copil, a 23-year old from Romania, is ranked No. 161 in the world and earned a top-4 seed in the tournament after qualifying over the weekend. Donaldson, who is currently ranked No. 343 in the world, has won his last three International Tennis Federation (ITF) Futures Tour tournaments and continued his solid play Monday. After a back-and-forth first set, Donaldson settled down and cruised in the second set thanks to a steady service game.

Klahn’s opening round match was originally scheduled for 5:30 p.m. but was delayed due to rain earlier in the day. Once the match began against Jordan Thompson (AUS), Klahn’s doubles partner, the Pomway, Calif. Native found himself in a battle. Both players held serve until Thompson broke Klahn in the 11th game. Thompson, who sported 120-plus mph serve, then held serve to take the first set, 7-5. Klahn quickly answered however, holding serve then breaking Thompson in the second game to go up 2-0. From there Klahn cruised to a 6-1 second-set victory. At that point, the match was halted due to darkness at 8:11 p.m., with each player holding a set.

The opening day of the tournament witnessed a pair of three-set matches as Ernesto Escobedo (USA) defeated fellow countryman Mackenzie McDonald 3-6, 6-4, 6-4 while qualifier Sekou Bangoura (USA) knocked off Facundo Mena (ARG) 6-0, 5-7, 6-2. After dropping the first set, Escobedo was impressive over the final two frames saving 7-of-9 break points in a match that took just under two hours. In the day’s longest match (2:01), Bangoura jumped out to a one-game lead thanks to a 6-0 first set limiting Mena to just 10 points. Mena rallied to take the second set, 7-5, but Bangoura was able to secure the three-set victory after breaking Mena three times in the deciding frame.

In the two other singles matches of the day Americans Dennis Nevolo and Daniel Nguyen each won in straight sets. Nevolo defeated Daniel Smethurst (GBR) 6-3, 7-6 (3) while Nguyen upended wild card Ryan Shane (USA), 6-4, 6-4. Nevolo (No. 446) didn’t register a single double-fault while his counterpart committed 11. Nguyen, who had to qualify for the main draw, broke Shane four times throughout their match to continue his week at the Challenger.

A pair of first round doubles matches were played on day one of the Challenger as Nguyen and Raymond Sarmiento (USA) defeated wild card Thomas Caputo (USA) and Richard Del Nunzio (USA), 6-3, 7-6. Nguyen and Sarmiento were doubles teammates at the University of Southern California helping the Trojans to three straight national championships. Caputo, a rising junior at nearby Binghamton University, competed in his first professional tournament. In one of the final matches of the day Takanyi Garanganga and Takura Happy of Zimbabwe defeated qualifiers Graham Alrutz and Keith Whittingham of the United States in straight sets, 6-4, 6-3.