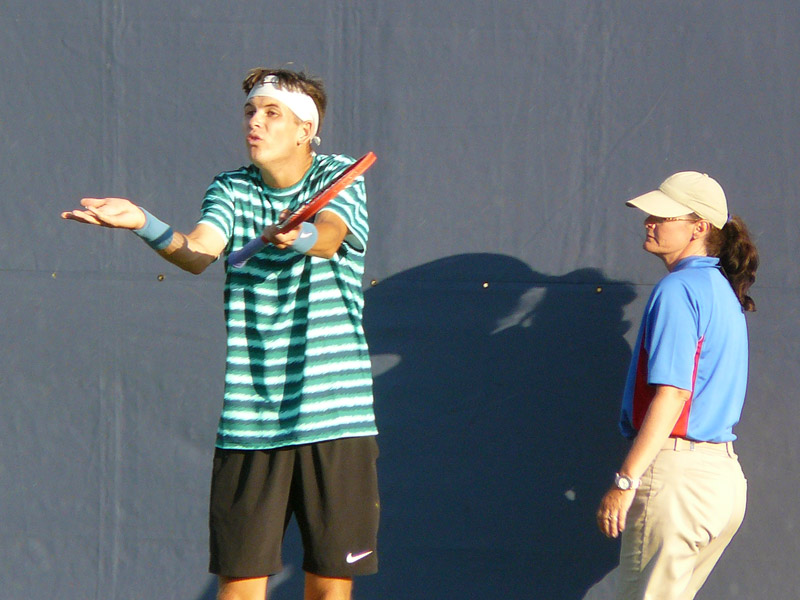 Cox, a native of Lincoln, England, rallied for a three-set (2-6, 6-4, 6-4) victory over the youngster from Rhode Island to advance to just his second quarterfinal on the ATP Challenger Tour. Donaldson (No. 343) cruised in the first set after breaking Cox in the fourth and eighth games taking control of the match with a 6-2 opening-set win. In the second set Donaldson began to unravel after Cox (No. 231) broke his serve in the ninth game to take a 5-4 lead. Cox followed up the break by holding his serve to level the match at one game apiece. The third and final set witnessed Cox seize an early break thanks to several unforced errors by Donaldson. From there Cox controlled his serve and kept Donaldson at bay with an arsenal of shots. Donaldson connected on nine aces, but four of those came in the first set.

Klahn (USA) advanced to the quarterfinals on the strength of his 6-3, 7-5 (10) straight set victory over Bangoura (USA). Klahn (No. 77) eased to a win in the first set after breaking the former University of Florida All-American in the fourth and eighth games. In a hotly contested second set, both players held serve throughout forcing a tiebreaker. Klahn’s service game was on point in the second set firing all seven of his aces during the frame. The 22 year-old Bangoura (No. 598) battled Klahn throughout the tiebreaker fighting off a match-point before collecting three set points. Unable to finish off the 2013 LG&T runnerup, Bangoura succumbed to Klahn’s devastating serve that at one point reached 124 mph. Klahn, the top ranked player in the tournament, went on to win the tiebreaker 12-10 on his third match point.

Darian King rallied for a three-set victory over American Dennis Nevolo, 2-6, 6-4, 6-4 in one of the longest matches of the tournaments, lasting over 138 minutes. After dropping the first set, the 22-year old from Barbados found himself down 3-2 in the second set. However, the 445th ranked player in the world fought back and won four of the next five games to take the frame 6-4, forcing a decisive third set. King jumped on Nevolo (No. 446) in the final frame getting an early break thanks to a solid return game winning 11-of-18 first serve return points. King will face Cox in the quarterfinals on Friday.
The eighth seed Wayne Odesnik (USA) proved why he was once ranked in the top-100 with his dominant straight set victory over Erik Crepaldi (ITA), 6-3, 6-0, completing the match in just 57 minutes. Currently ranked No. 209 in the world, Odesnik connected on seven aces during the match limiting Crepaldi to just nine total points in the second set. Odesnik will face top-seed Bradley Klahn in the quarterfinals.

In first round doubles action, Marius Copil (ROU) and Sergiy Stakhovsky (UKR) handled the wild card duo of Sarvar Ikramov (UZB) and Nail Khabiyev (USA) in straight sets, 6-3, 6-2. They will face second-seed Thanasi Kokkinakis (AUS) and Denis Kudla (USA) in the quarterfinals after the pair defeated Americans Marcos Giron and Austin Krajicek, 6-3, 7-5. The quarterfinal meeting between the two doubles teams will be the featured match on center court Thursday evening.

Americans Mitchell Krueger and Mackenzie McDonald dispensed the duo of Crepaldi and Facundo Mena (ARG) in straight sets, 6-3, 6-3, finishing the match in less than 53 minutes. The third-seeded American team of Jarmere Jenkins and Rhyne Williams also advanced to the doubles quarterfinals after holding on for the 6-4, 4-6, 10-3 win over countrymen Dennis Nevolo and Dennis Novikov. Jenkins and Williams are former ITA All-Americans and will face Daniel Nguyen and Raymond Sarmiento in the quarterfinals.