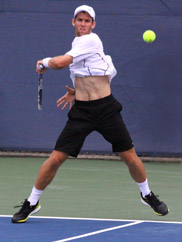 Top seed Bradley Klahn withdrew from the tournament Friday morning due to an injury. He was on his way to being a semi-finalist in both singles and doubles competition. Second seed Sergiy Stakhovsky eased to the semifinals with a straight set victory. The singles draw is down to the final four.

Klahn, just one of two Americans left in the field, was forced to resign from the tournament prior to his quarterfinal match against No. 8 Wayne Odesnik (USA) due to an injury. The highest ranked player in the field at No. 77 in the world decided to rest the injury prior to the US Open, which begins in late August. Klahn qualified for the main draw of the year’s final Grand Slam based on his world ranking. The Pomway, Calif. native was also scheduled to play a doubles semifinal match on Saturday with partner Jordan Thompson (AUS) against the English duo of Daniel Cox and Daniel Smethurst, who will move onto Sunday’s final as a result of Klahn’s withdrawal.

Stakhovsky (UKR) cruised to a straight set victory over 18-year old Australian Thanasi Kokkinakis, 6-3, 6-2, as the No. 88 player in the world dominated the service game in match that featured a pair of players 6-foot-4 or taller. The second-seeded Stakhovsky won 25-of-29 first service points, while never allowing a break saving all three Kokkinakis break-point opportunities. In the first set both players held serve until Stakhovsky broke Kokkinakis (No. 298) in the eighth game taking a 5-3 advantage. Serving for the set, the 28-year old veteran smashed a 121 mph service ace to close out the frame, 6-3. Stakhovsky then broke Kokkinakis’ serve in the fifth and seventh games in the second set to ease to the 6-2 victory. It is the second ATP Challenger Tour semifinal of 2014 for Stakhovsky.

Englishman Daniel Cox eased to a 6-3, 6-2 straight set victory over Darian King (No. 445) of Barbados. Cox needed just over an hour to end King’s week thanks to a solid service game where he won almost 80 percent of his points (39-of-49). In the first set, the 22-year old Cox, who is ranked 231st in the world broke King’s serve in the fourth game to open a 3-1 lead. From there each player held serve as Cox took the opening set 6-3. Cox earned breaks in the fifth and seventh games of the second set to take the frame 6-2 and move on to the semifinals tomorrow where he will face Stakhovsky. It will be the first career ATP Challenger Tour semifinal appearance for Cox.

In the day’s first quarterfinal match, Takanyi Garanganga rallied for a 2-6, 7-5, 6-4 victory over 18-year old Ernest Escobedo (USA) advancing to tomorrow’s semifinal against Odesnik. The 23-year old from Zimbabwe dropped the opening set, but gained an early break in the second set to take a 3-2 advantage. Escobedo (No. 582) responded immediately with a break of his own to even the frame at 3-3 as both players held serve until the 11th game. A pair of backhand winners helped Garanganga break Escobedo to take a 6-5 lead and serve for the set. A 125 mph ace by Garanganga gave the 311th ranked player in the world a 30-0 lead, eventually winning the frame, 7-5. In the decisive third set, Escobedo again broke Garanganga early and jumped out to a 2-0 lead. However, Garanganga won six of the next eight games advancing to his first ATP Challenger Tour semifinal since April 2013. Each of Garanganga’s three matches en route to the semifinals went three sets.