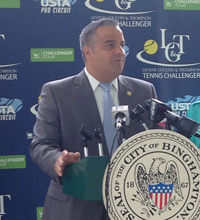 Binghamton Mayor Rich David helped announce the field for the 2015 LG&T Challenger in the Pavillion at Recreation Park on July 9th.

American Bjorn Fratangelo, who is currently ranked No. 124 in the world, is the highest-ranked player of the 22 men who received direct acceptance. He last made an appearance at the tournament as the top-seed in 2013’s qualifying draw. Ranked 335 at the time, he was knocked out of contention for the main draw by Frederik Nielsen.

Fratangelo highlights a group of seven Americans who received bids to the main draw including 2013 LG&T champion Alex Kuznetsov (No. 272), 18-year old rising star Jared Donaldson (No. 155) and tour veteran Ryan Sweeting (No. 245). The three other Americans in the field are Dennis Novikov (No. 196), Daniel Nguyen (No. 229) and Frances Tiafoe (No. 291).