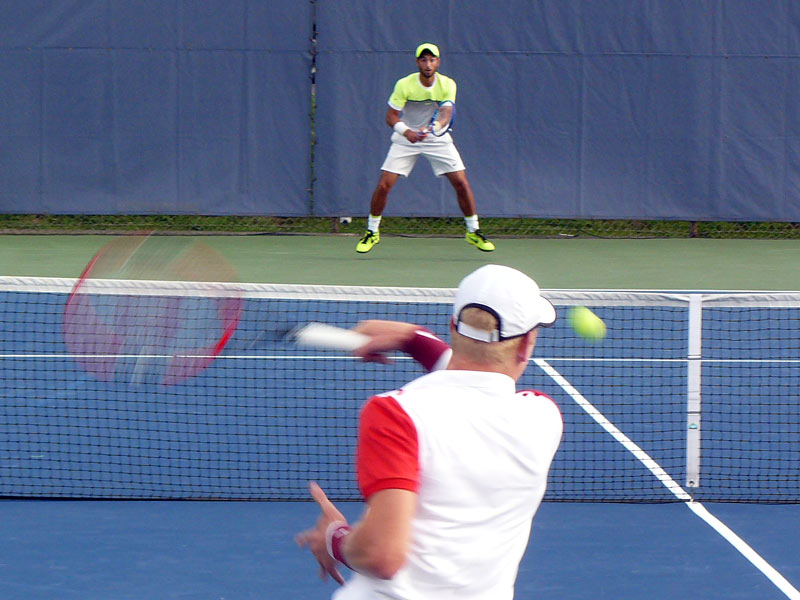 The semifinals in the doubles draw is set, but the singles draw is still waiting for one more quarterfinal participant as the match between top-seed Kyle Edmund (GBR) and wild card Noah Rubin was suspended due to darkness, tied at one set apiece. The pair will resume their match following Friday’s opening bout.

The first match of the day proved to be one of the best of the tournament as American qualifier Nicolas Meister took down Bulgaria’s Dimitar Kutrovsky in a nearly three-hour marathon. The 26-year old Meister rallied from a 4-1 deficit in the opening frame to win the first set, 7-6(6). Kutrovsky controlled the second set throughout, leveling the match at one set apiece with a 6-3 victory.

In a very competitive third set, neither player gave in as Kutrovsky erased a 4-1 deficit to force a tiebreak. However, Meister won the first two points off Kutrovsky’s serve and never looked back winning the tiebreaker, 7-3. Meister became the second qualifier at the LGT Challenger to advance to the quarterfinals.

A little later in the day, American Mitchell Krueger became the third qualifier to reach the quarterfinals with his, 7-5, 6-4, straight set victory over wild card entrant Tommy Paul. In the first set, Krueger earned a key break in the 11th game to go up, 6-5, and then held serve to take the opening set. The 21-year old captured his fourth ATP Challenger Tour quarterfinal appearance of 2015 after going up 2-0 in the second set, eventually holding off the 2015 French Open Junior champion.

Second-seeded Bjorn Fratangelo, held off 17-year old Frances Tiafoe, 4-6, 6-3, 6-4, in an all-American matchup. Fratangelo, who played his second three-setter of the tournament, dropped the first set 6-4 after Tiafoe broke the 123rd ranked player in the world twice in the frame. The 22-year old Fratangelo bounced back with a 6-3 victory in the second set before rallying from a 4-3 hole in the third to take the final set, 6-4. With the victory, Fratangelo advanced to his eighth ATP Challenger Tour quarterfinal of 2015. 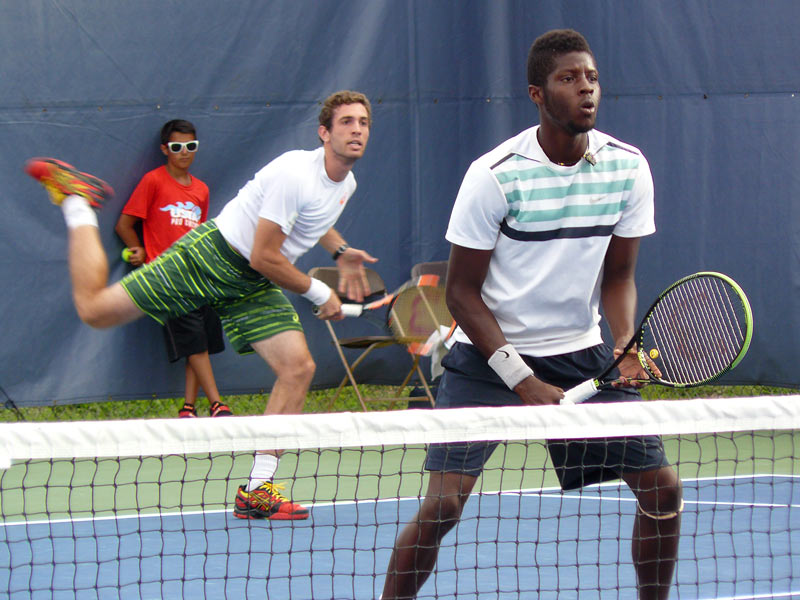 In doubles action, the top-seeded duo of Dean O’Brien and Ruan Roelofse cruised by the Croatian pair of Ante Pavic and Matija Pecotic, 6-4, 6-2. The South African team took just 58 minutes to advance to semifinals where they will face the No. 4 seeds Luke Bambridge and Liam Broady of Great Britain.

The second-seeded team of Carsten Ball (AUS) and Brydan Klein (GBR) were upset by the American pair of Daniel Nguyen and Dennis Novikov, 6-4, 6-4. Nguyen and Novikov fell behind 4-1 in the second set before winning the next five games to move on to the semifinals.

In the final doubles match of the day, the team of Sekou Bangoura (USA) and Guilherme Clezar (BRA) defeated Fratangelo and Nicolas Jarry (CHI), 4-6, 7-5, 10-5, to advance to Friday’s semifinal.

Friday’s action begins at 11 am and will feature all four quarterfinal matches and one semifinal.