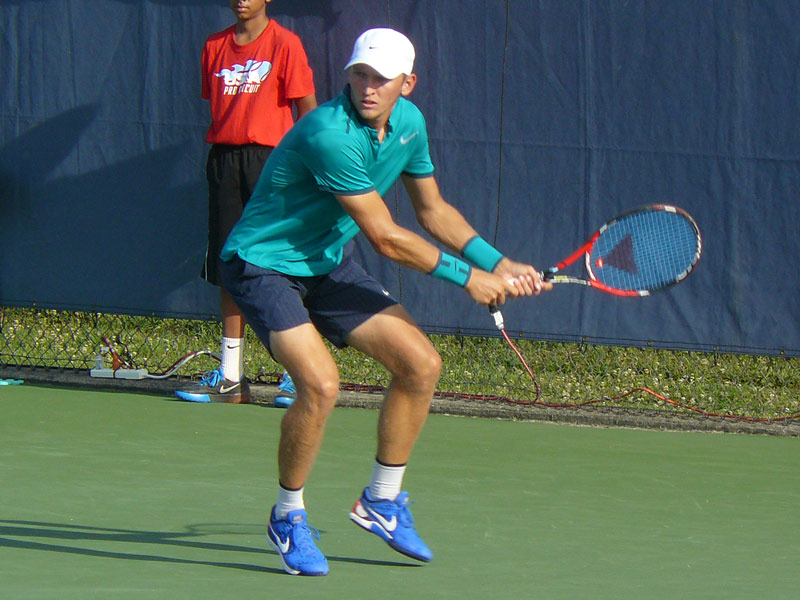 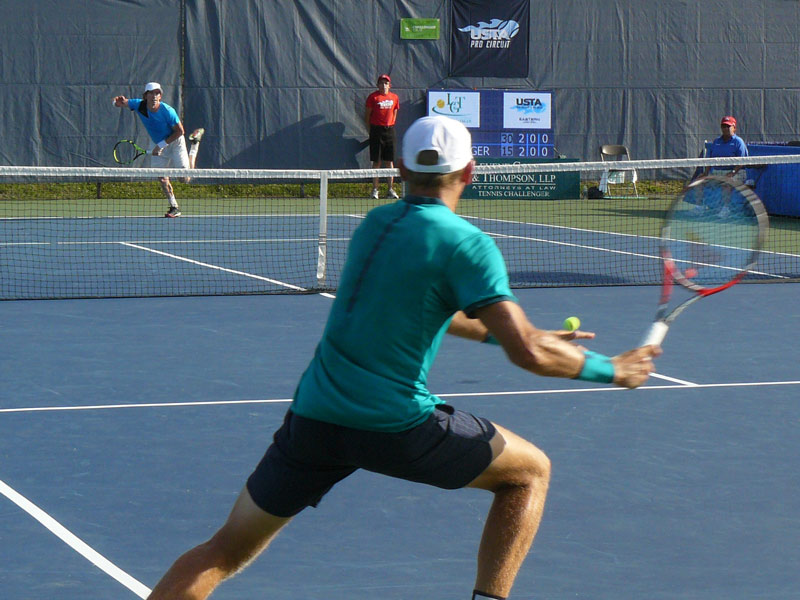 In the day’s featured match, Krueger pulled out a dramatic 7-5, 7-6 (5)victory over fourth-seeded John-Patrick Smith. With a 6-5 lead in the first set, Krueger, a 22-year-old from Texas, broke his opponent’s serve and took charge of the bout. The second set was a wild one,
seeing several momentum changes and broken serves. Krueger grabbed an early advantage, but Smith responded, going up, 5-4. Krueger tied the match and eventually forced a tiebreaker, where he scored a 7-5 win, propelling himself into the quarterfinals. 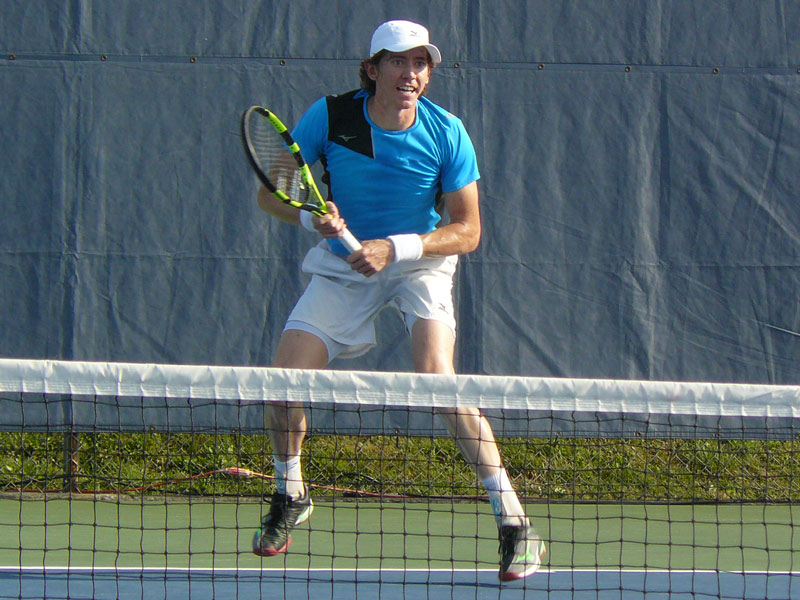 In the first match of the day, Klein dropped the first set to Aleksandar Vukic, 7-6 (4), before coming back to win by scores of 6-3 and 6-1 to advance to the quarterfinal round. The players competed to a tiebreaker in the opening set, with Vukic gaining the upper hand on his way to a 7-4 decision. Klein rallied from there, though, breaking Vukic’s serve midway through the second and early in the third, gathering momentum as the contest continued. Klein, out of Great Britain, was a semifinalist at last year’s event.

Ramanathan also fell in his first set of the day before rallying to win. Ramanathan fell, 6-2, to Jose Statham in their opening frame, but the 21-year old responded with a late break of Statham’s serve to take the second set, 6-4. In the decisive third, the foes dueled to a tiebreaker,with Ramanathan using his serve to create points. He recorded 14 aces in the frame, using his serve as his primary weapon in the tiebreaker,where Ramanathan took control. He won the first five points, eventually rolling to a 7-3 win, securing his spot in the quarterfinals. Ramanathan will meet Klein in the next round.

Moriya handled Sekou Bangoura, 6-4 and 6-4, in their second-round contest Thursday. Bangoura won the first two games of the opener, but Moriya quickly responded, tying the set at two games apiece before going on to a 6-4 victory. Moriya followed with another 6-4 win in the second, breaking Bangoura’s serve to end the contest and earning a quarterfinal berth. 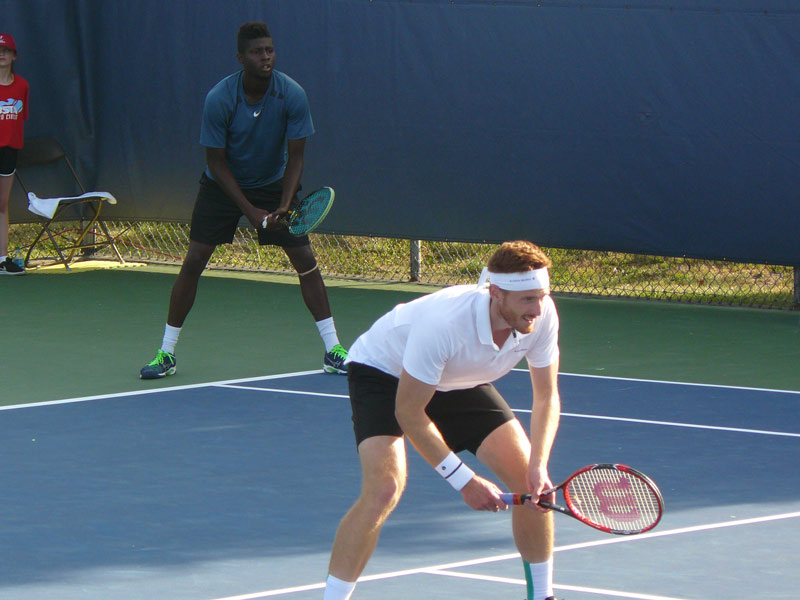 In quarterfinal doubles action, Bangoura and David O’Hare won their match late in the afternoon, holding off the team of Alex Lawson and Jackson Withrow in a tight 7-6(5), 7-6(3), contest.Bangoura and O’Hare controlled the action on their first serve, winning 38-42 points in the situation. 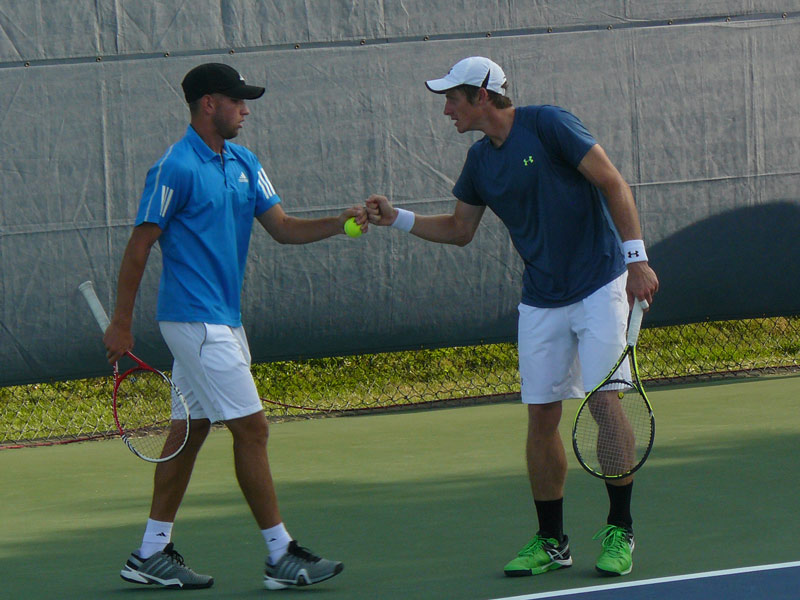 Quentin Halys and Stefan Kozlov teamed up for a straight set win over Benjamin Mitchell and Jarryd Chaplin, with scores of 6-3 and 7-6 (8). Halys and Kozlov charged past their foes in the first set, but the second frame proved tougher. The teams squared off into a tiebreaker. Each side came up with impressive shots, scoring points and pushing the contest closer to conclusion. At 8-8, Halys and Kozlov found separation, posting a stellar winner that split Mitchell and Chaplin and then forcing an errant shot to secure the win.