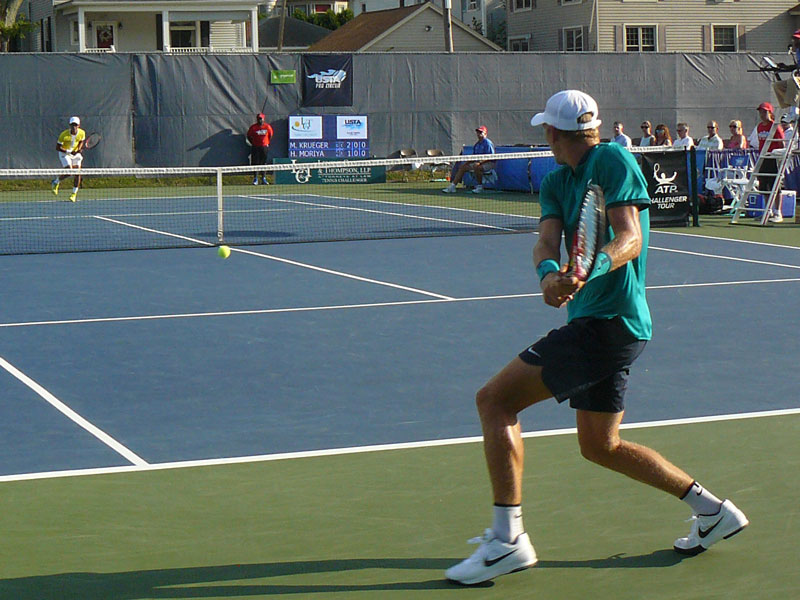 Players dropped out of the tournament due to heat exhaustion and battled cramps throughout the day Friday as the semifinals for both the singles and doubles draw were finalized. On a day where temperatures reached the mid-90s, Mitchell Krueger was the lone American to survive and advance into the semifinals. Joining him in the semifinals were Darian King from Barbados, Andrey Golubev from Kazakhstan, and Ramkumar Ramanathan from India. 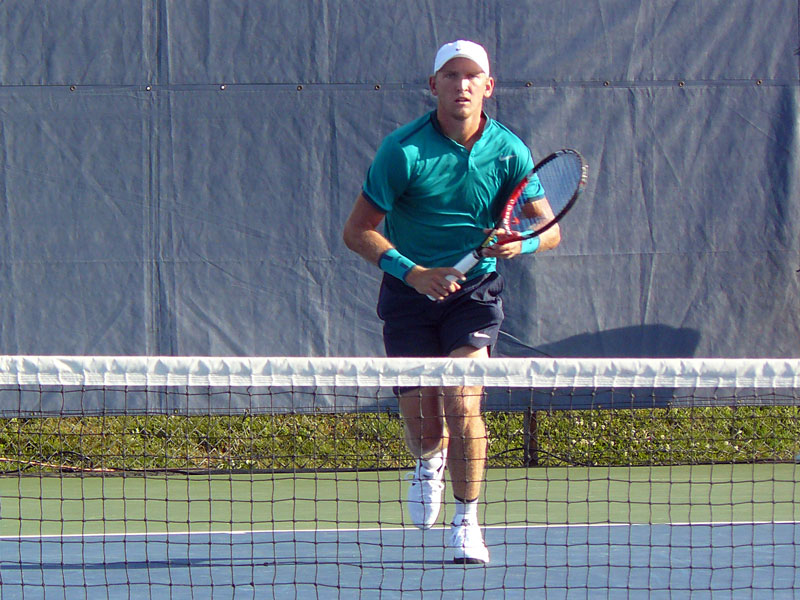 Krueger outlasted Japan’s Hiroki Moriya defeating the 25 year-old from Tokyo in straight sets, 6-3, 7-6(3). Krueger advanced to his first ATP Challenger Tour semifinal since last August at the Kentucky Bank Tennis Championships (Lexington, KY), which follows the LG&T tournament. Krueger the final American in the singles draw will earn the maximum amount of points (48) for the first leg of the US Open Wild Card Challenge. 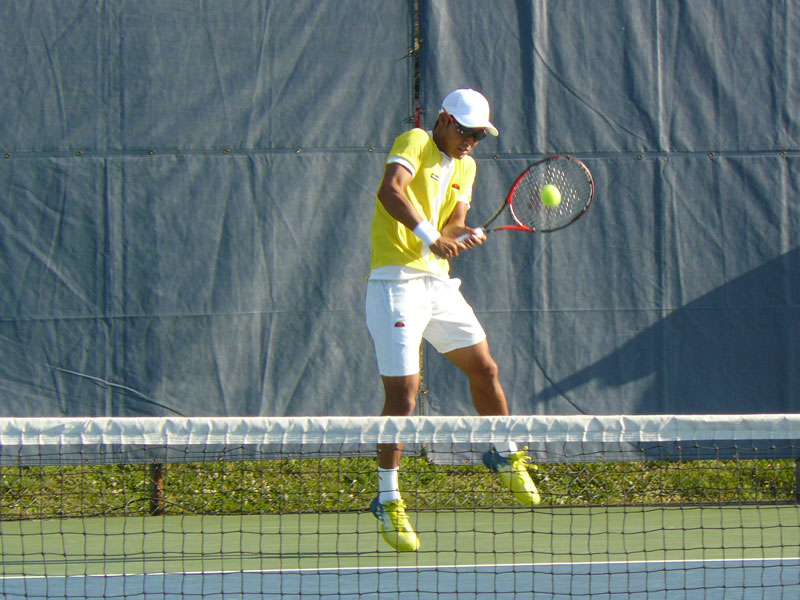 After earning a break midway through the first set Krueger was able to hold his service game taking a 1-0 advantage in the match. The second set did not come as easy as both competitors tested each other. The pair traded blows with neither blinking until Krueger was finally able to break Moriya’s serve in the 11thgame to take a 6-5 advantage. Moriya immediately answered with a break of his own to force a tiebreak.

With the tiebreak knotted at three Moriya began to pull away winning three of the next four points to stake out a 6-4 lead. Facing set-point twice Krueger battled back to level the tiebreak at six in part due to a Moriya double-fault. The 22-year old Texanwon the next two points thanks to a dominant backhand winning the tiebreak 8-6, as the sun was setting on Recreation Park. Krueger faces Ramanathan in Saturday’s second semifinal.

Darian King produced a stellar first set in his win over third-seeded Stefan Kozlov. King, the sixth seed out of Barbados, cruised to 6-2first-set victory, breaking his opponent’s serve early in the frame. He then grabbed a 4-1 lead in the next set, and a laboring Kozlov retired possibly due to heat exhaustion, pushing King into the semifinals. The 24-year old is coming off his first ATP Challenger Tour title, winning the Milo Open in Colombia almost two weeks ago. He will face Andrey Golubev (KAZ) in Saturday’s first semifinal match.

The longest match of the day was between Brydan Klein (GBR) and Ramkumar Ramanathan (IND). The pair battled for over two hours and thirty minutes in 90-plus degree weather. The first set witnessed each player hold serve as Klein, a semifinalist at the 2015 LGT Challenger, impressively saved five break points in the ninth game. Ramanathan utilized a dominant service game to force a first-set tiebreak thanks to a 125 mph ace. During the tiebreak Klein rallied from a 4-2 deficit at the switch, but it wasn’t enough as Ramanathan won the final two points to take the opening frame, 7-6(5).

The second set proved to be very similar to the first as both players held serve until Ramanathan broke Klein in the eighth game to surge out to a 5-3 advantage. The Englishmen immediately returned the favor, then held serve to level the set at five games apiece. Each player stood their ground in the final two games forcing a second-set tiebreak. A re-energized Klein, who seemed to be battling cramps throughout the match, cruised in the tiebreak to take the second set, 7-6(3).

Ramanthan took advantage of Klein’s immobility in the third set jumping out to a quick 4-1 lead thanks to breaks in the first and fifth games. The 21-year old Indian fired 16 aces throughout the match to keep Klein off-balanced. Visibly limping during the final set, Klein was no match for Ramanathan, who took the decisive frame, 6-2.

Golubev needed three sets and almost two hours to upend alternate Lloyd Glasspool of Great Britain. The ninth-seed won 6-4, 2-6, 6-4 in an extremely competitive match. The 22-year old Glasspool connected on 12 aces, but was unable to overcome unforced errors in the return game. The 29-year old Golubev, who has been ranked as high as No. 33in the world (2010), has won seven ATP Challenger Tour titles,most recently coming this past June at the Poprad-Tatry Challenger in Slovakia.

In doubles quarterfinals action, the second-seeded Australian duo of Matt Reid and John-Patrick Smith needed just 43 minutes to advance past Americans Tommy Paul and Thai-Son Kwiatkowski, 6-2, 6-2. Reid and Smith, who are ranked 281st in the world as a doubles team, won 81 percent (22-of-27) of their first service points, never allowing the young wild card team from the US to gain any momentum. Reid and Smith advanced to face Sekou Bangoura (USA) and David O’Hare (IRL) in Saturday’s semifinal.

In what was supposed to be the first doubles semifinal bout, Liam Broady(GBR)and Guilherme Clezar(BRA)advanced to the finals, as Kozlov was unable to play due to illness. The 18-year old Americanand Quentin Halys were forced to forfeit the contest, allowing Broady and Clezar to advance via walk-over.