Jordan Thompson, currently the 80th ranked player in the world, will be the No. 1 seed at the 2017 LGT Challenger. He won his first ATP Challenger Tour title in February of 2016 at the La Mache Challenger. In May of the same year, the 23-year old won the Kunming Open for a purse of $100,000, increasing his ranking into the top 100 for the first time in his career.

Thompson commenced the year at the 2017 Brisbane International, where he made his first ATP World Tour quarterfinal. He also became part of the first Australian duo to win the Brisbane International doubles tournament with Thanasi Kokkinakis. At the Queen’s Club Championship, Thompson defeated world number one Andy Murray, 7-6, 6-2 in the first round. Along with it being his first win against a top-ten player, he became the first Australian player to beat Murray in an ATP-level singles match.

Alexander Bublik, who is ranked at a career high No. 124 in the world, comes in as the second seed in the main draw. He has won five ITF Futures Tournaments since 2013 and made his ATP main draw debut at the 2016 St. Petersburg Open where he received wildcards into the singles and doubles main draw. The 20-year old won his first ATP Challenger Tour title this past February in Cuernavaca, Mexico.

Mmoh is the top-ranked American teenager at No. 173. The 19-year old from Bradenton is the reigning USTA junior national champion. He has enjoyed some early success on the ITF Futures tour, winning three of his four titles before the age of 18. He reached his top 200 ranking after claiming his first ATP Challenger Tour title at Knoxville in November of 2016.

Kudla comes in ranked at No. 178 follows Mmoh as the sixth seed in the round of 32. He reached a career-high ranking of No. 53 in May of 2016. The 24-year old from Arlington, Virginia has won five ATP Challenger Tour Events, his last one coming in 2015 at Ilkley, United Kingdom. 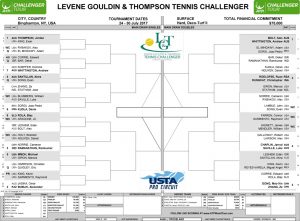